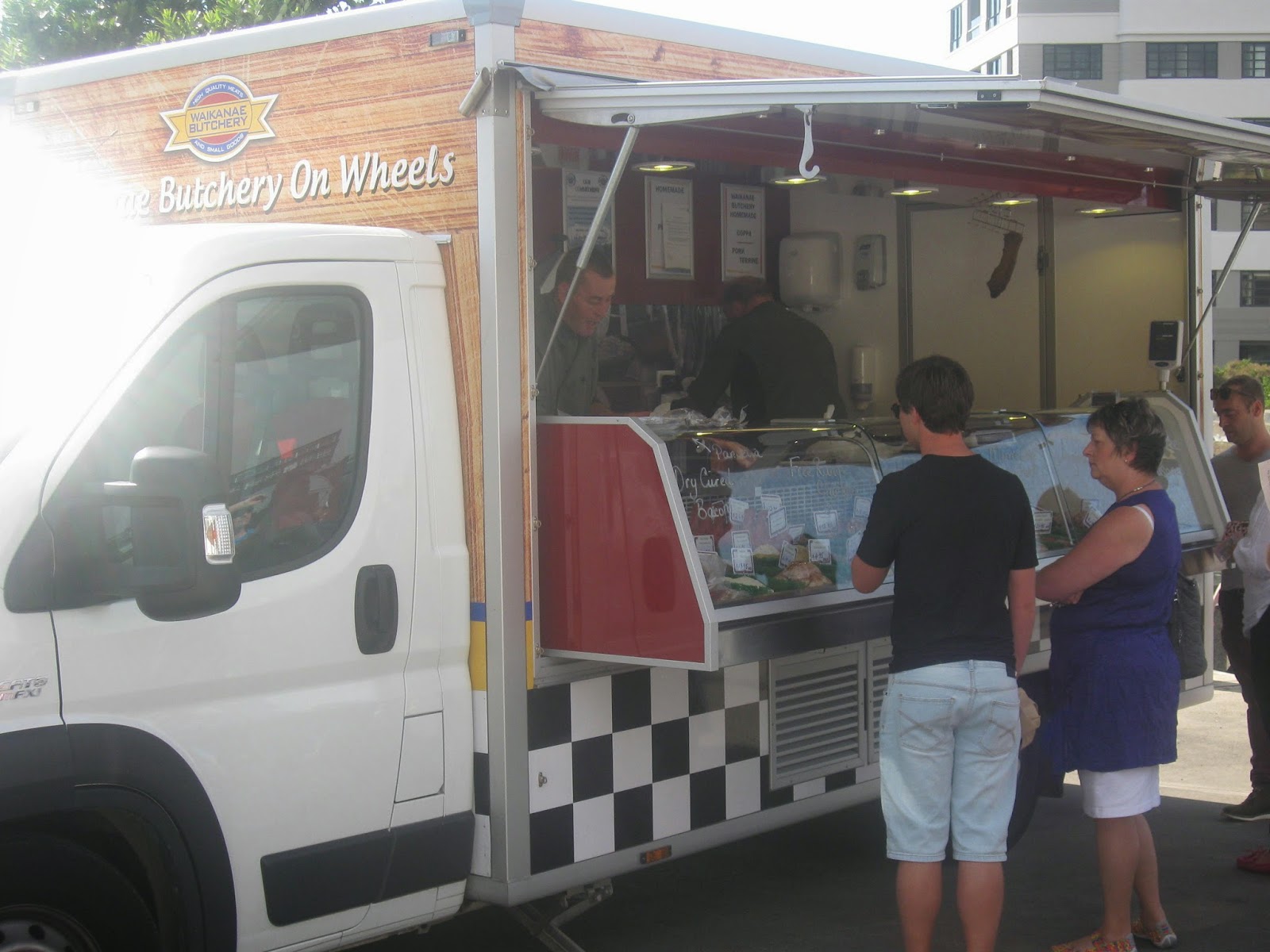 These were purchased from Waikanae Butchery’s truck at the Sunday morning market at Chaffers St. I have taken a couple of photos of the truck. It is an impressive purpose built mobile butcher’s shop. The day I was there the two butchers were very busy dealing with customers who were seeking to buy quality meat and sausages. 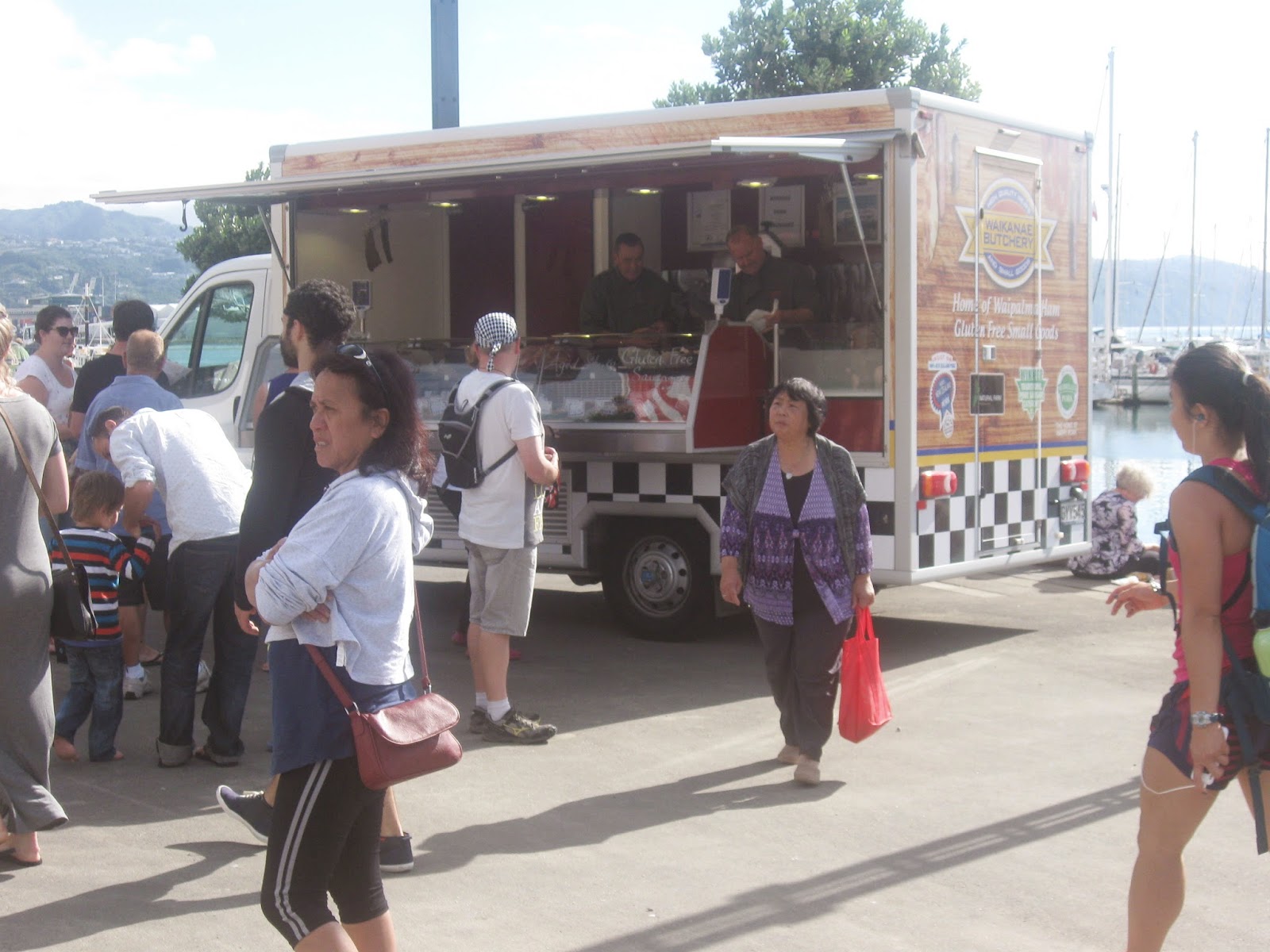 I bought ten chicken orange and ginger sausages and cooked them up for the family dinner. The sausages are long and thin, giving off a delicate aroma of orange prior to cooking. The butcher told me they use whole oranges when making the sausages, so maybe you can get also get your daily dose of vitamin C through these snarlers. They are a fine to medium ground sausage and cooked nicely. 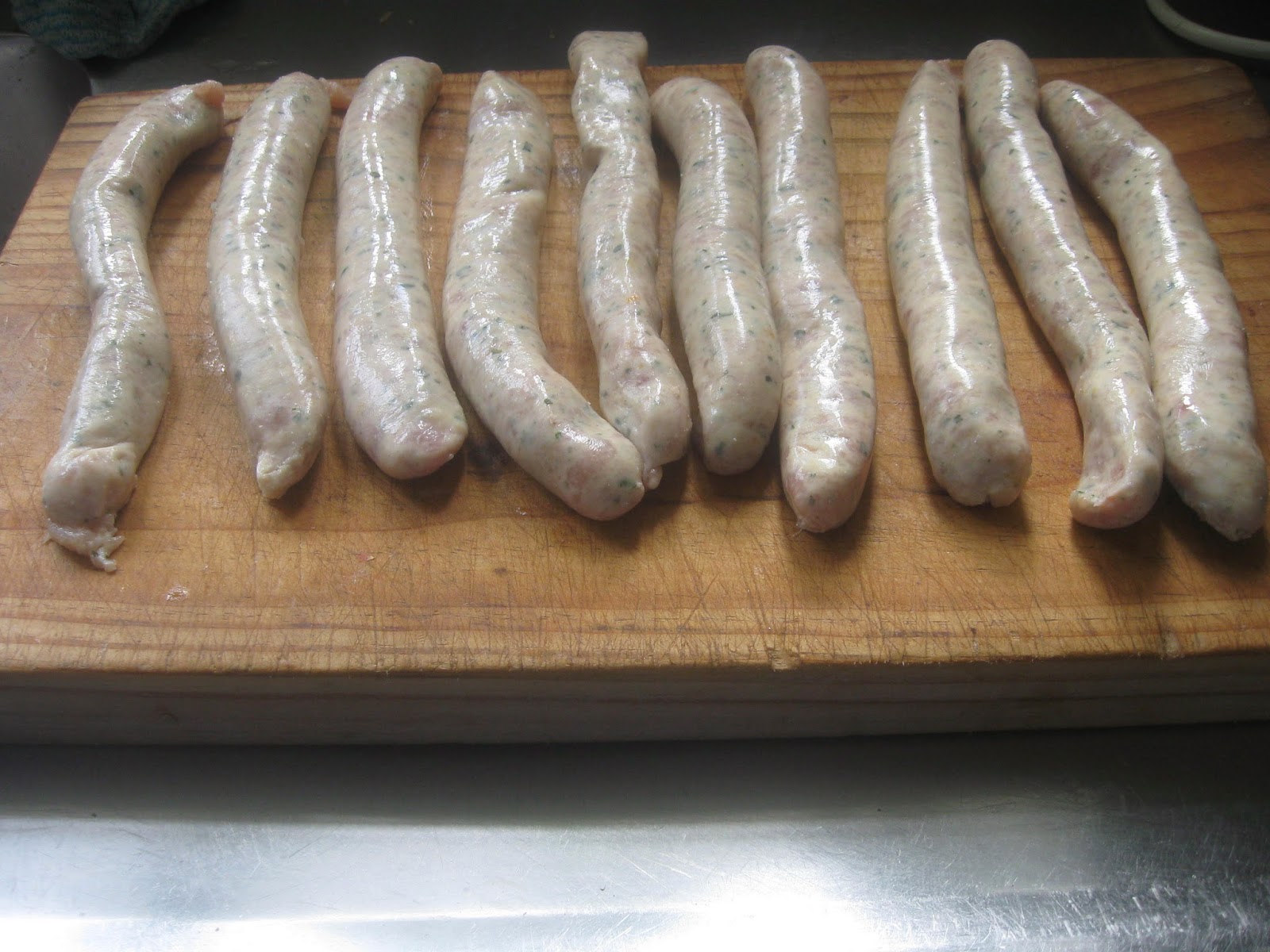 When eaten the initial flavour is the orange citrus taste. As the sausage goes to the back of mouth a secondary taste is one of mild ginger. The chicken meat complements these flavours. There were flecks of a green herb that could be observed in the sausage, maybe sage? But my ever alert and sophisticated palate could not detect the exact flavour. This is a quality chicken sausage and they disappeared quickly from the dinner table. My wife liked them but my daughter said she was not sure about the merits of fruit flavoured sausage. I asked her what she thought about pork and apple and she then said that I should not identify inconsistencies in her statements and got a bit huffy, in a pleasant adolescent way. Oh the joys of being a parent. My son liked them, and quickly helped himself to another. 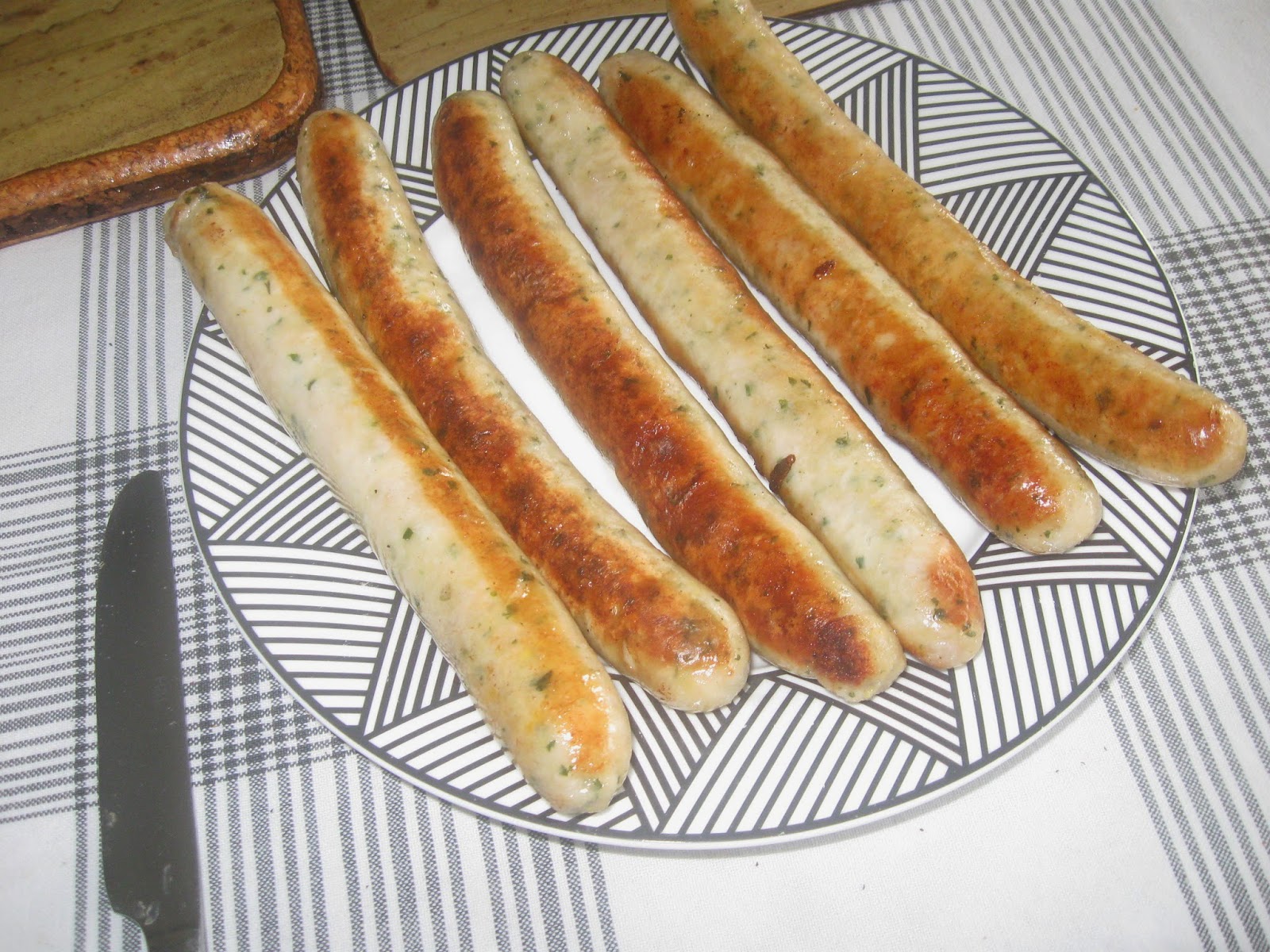 Email ThisBlogThis!Share to TwitterShare to FacebookShare to Pinterest
Labels: Chicken with Orange and Ginger, Waikanae Butchery


I was at the supermarket shopping and thought I would add a tube of white pudding to the groceries. This was a small tube made by Harrington’s who have a butchery in Miramar. I cooked these up as an aperitif as I cooked dinner. I was hungry and ate quite few slices. My son also wanted some so the white pudding did not go very far. 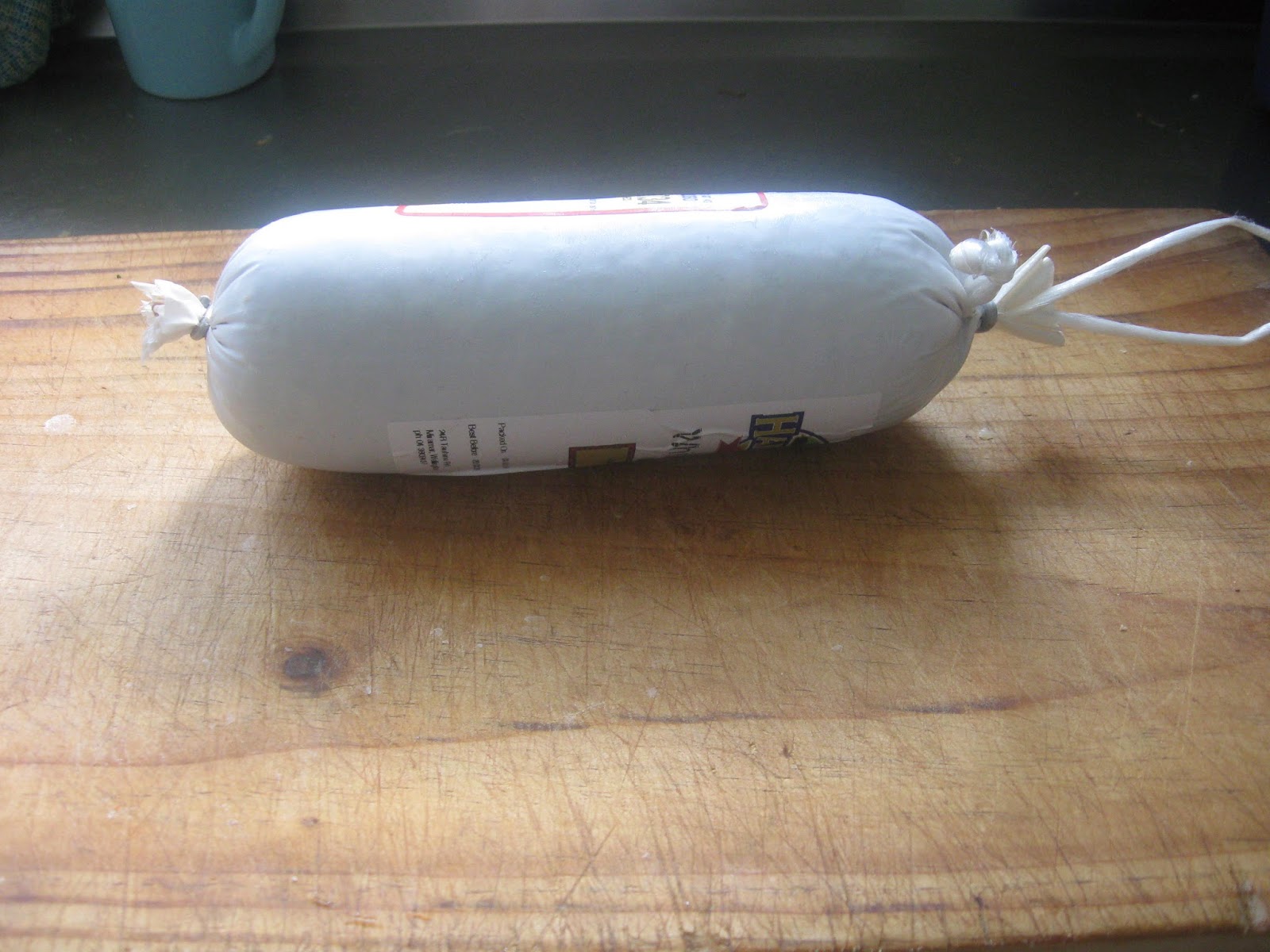 Although white pudding may be considered as a breakfast or lunch sausage it also goes down well as small snack prior to dinner. This sausage was chunky and it did have some congealed fat when I opened the tube. The small kernels and flecks of millet could be seen in the sausage. The taste of white pudding was nice - it had a slight amount of hotness on the palate with a stronger aftertaste of heat which was mild. 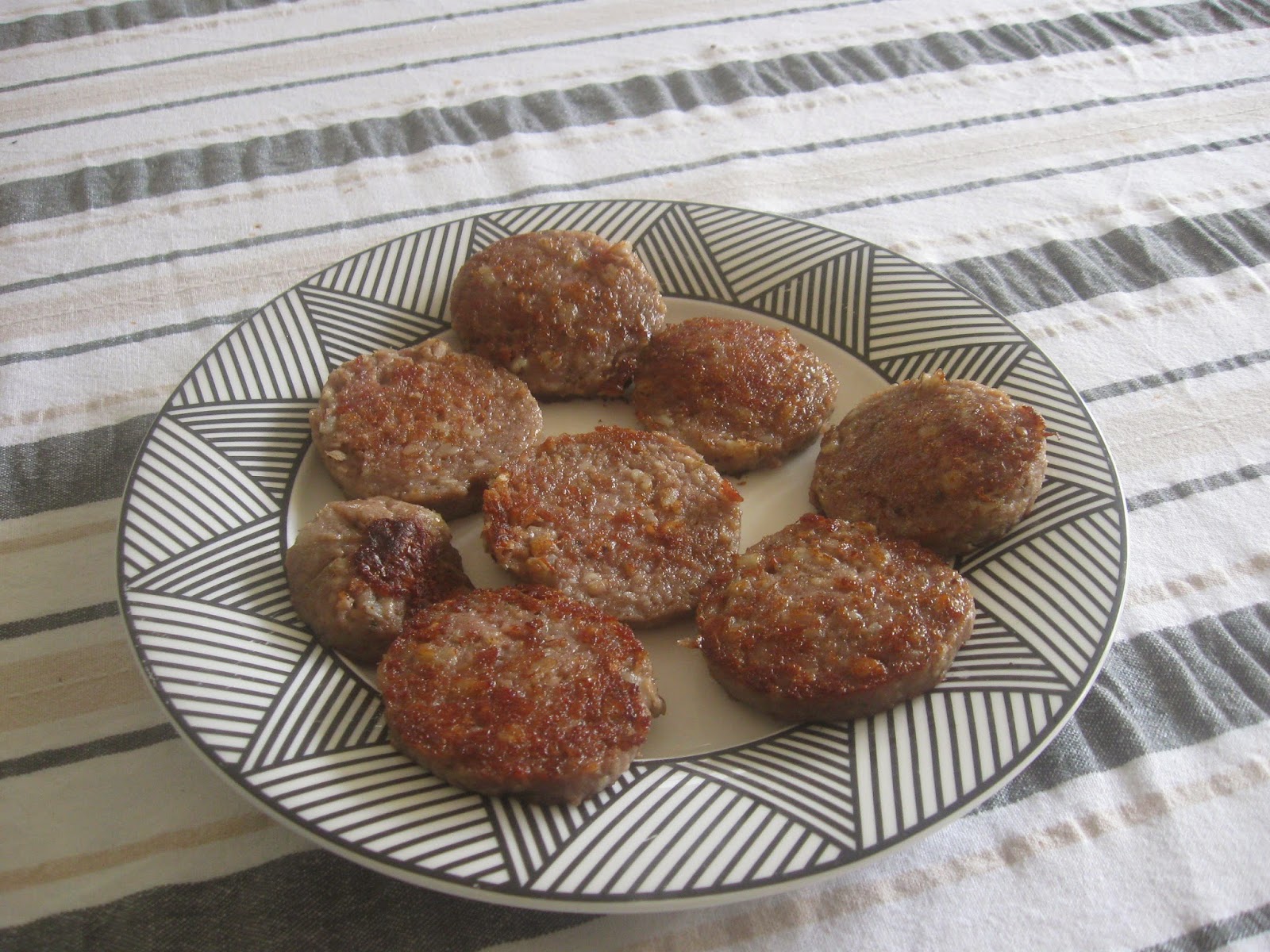 The labelling on the tube said the white pudding had been made with pork and veal. This was a pleasant sausage that I would buy again but I would rank it at the lower end of my ‘must buy again’ list.
I went to Harrington’s website to see if there was more information available. www.harringtonsmallgoods.co.nz This website imparts very little information and could do with a major revamp. Currently there is a list of products and not much more, a greater amount of information could easily be given about the products Harrington’s make.

It is not all beer and sausages - Part six

It is not about beer and sausages - Part Six

Yesterday I competed in the Tararua Mountain Race. I don’t consider this a race, although those nearer the front do. It is an event for those of at the back of field - we are happy to finish. There was a new route this year, starting from Kaitoke, north of Upper Hutt, to the Holdsworth road end, inland from Masterton. The track went through around 40km of tramping tracks, across three ridges and up 2300m of vertical climb on the course.

What was at the end of all that? You guessed it…. I am creature of habit, so it was the usual beer and sausages.

But before I get onto these, a quick recap of the event. I felt quite good up to the check point at Totara Flats Hut and at this stage I had been going for six hours. The running conditions were very good with mild overcast weather. On the climbs I got to the top of each ascent in a quicker time than I had anticipated. I thought I was on to finish in less than eight hours, a result I would have been very happy with. However once I started the final section I realised the knee that I knew was sore was beginning to play up. Going downhill it hurt. Once I had completed the steepest ascent on the course, I was very slow on the downward section. A guy who passed me took pity on me and offered some anti-inflammatories. I took these when he reassuringly that they were the good stuff. After twenty minutes or so I knew they had kicked in. At end when I was talking to him he said they were his wife’s arthritis medication. The good news is they didn’t have drug testing at the end of race, although the organisers could easily have had a psychiatrist on hand to certify the mental state of those who took part. I made it to the finish in 8.36. I was satisfied, but left with the feeling that I could have done better if not for the knee.


I asked my wife to bring the sausages I had cooked the night before to the finish. They were Dutch braadworst from Park Avenue Quality Meats see link, and wild pork sausages from the Waikanae Butchery. 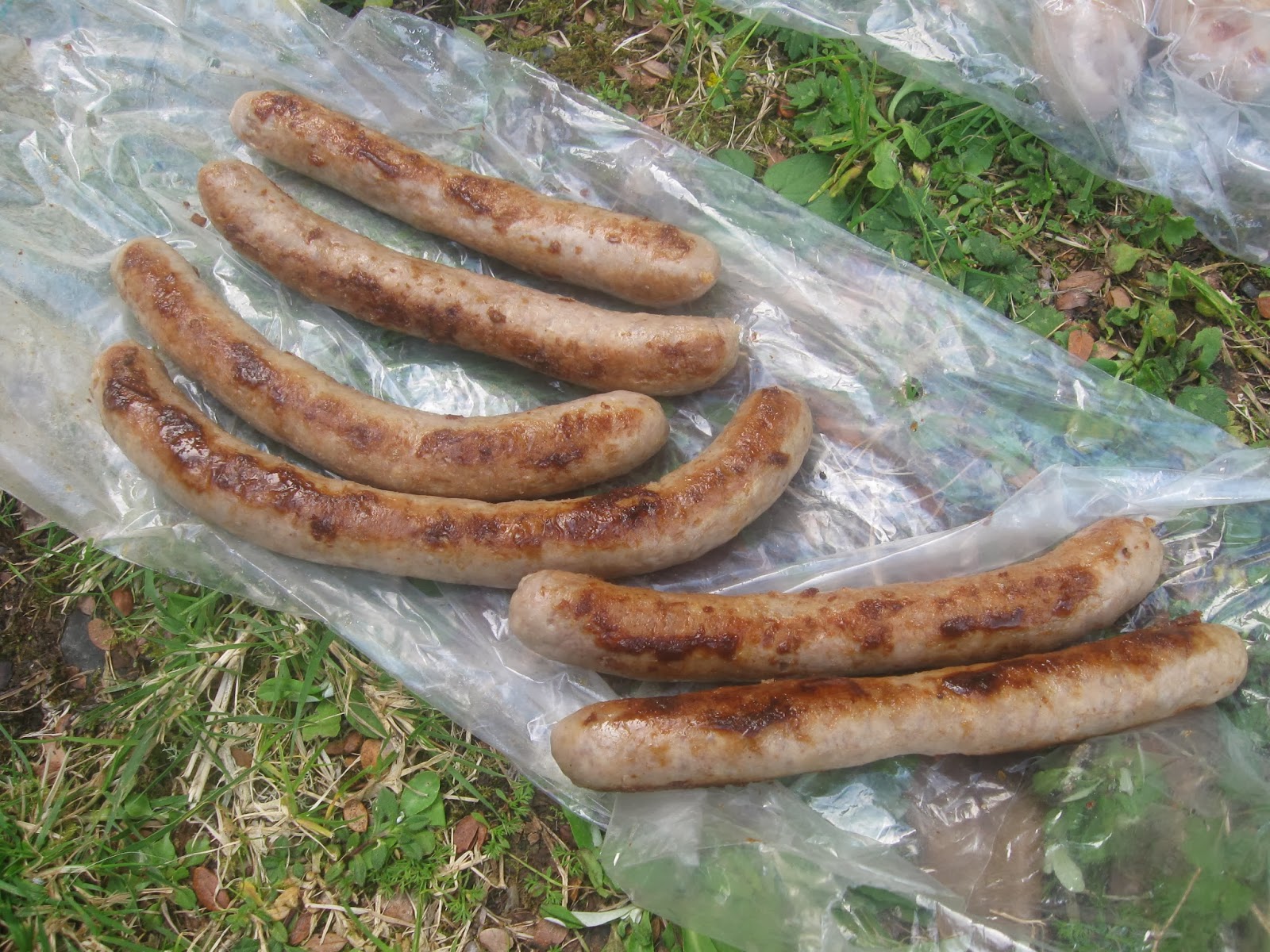 Between Cone and Totara Flats I had seen a couple of groups of hunters, I hope they managed to get a pig or two, so they could enjoy their own wild pork. 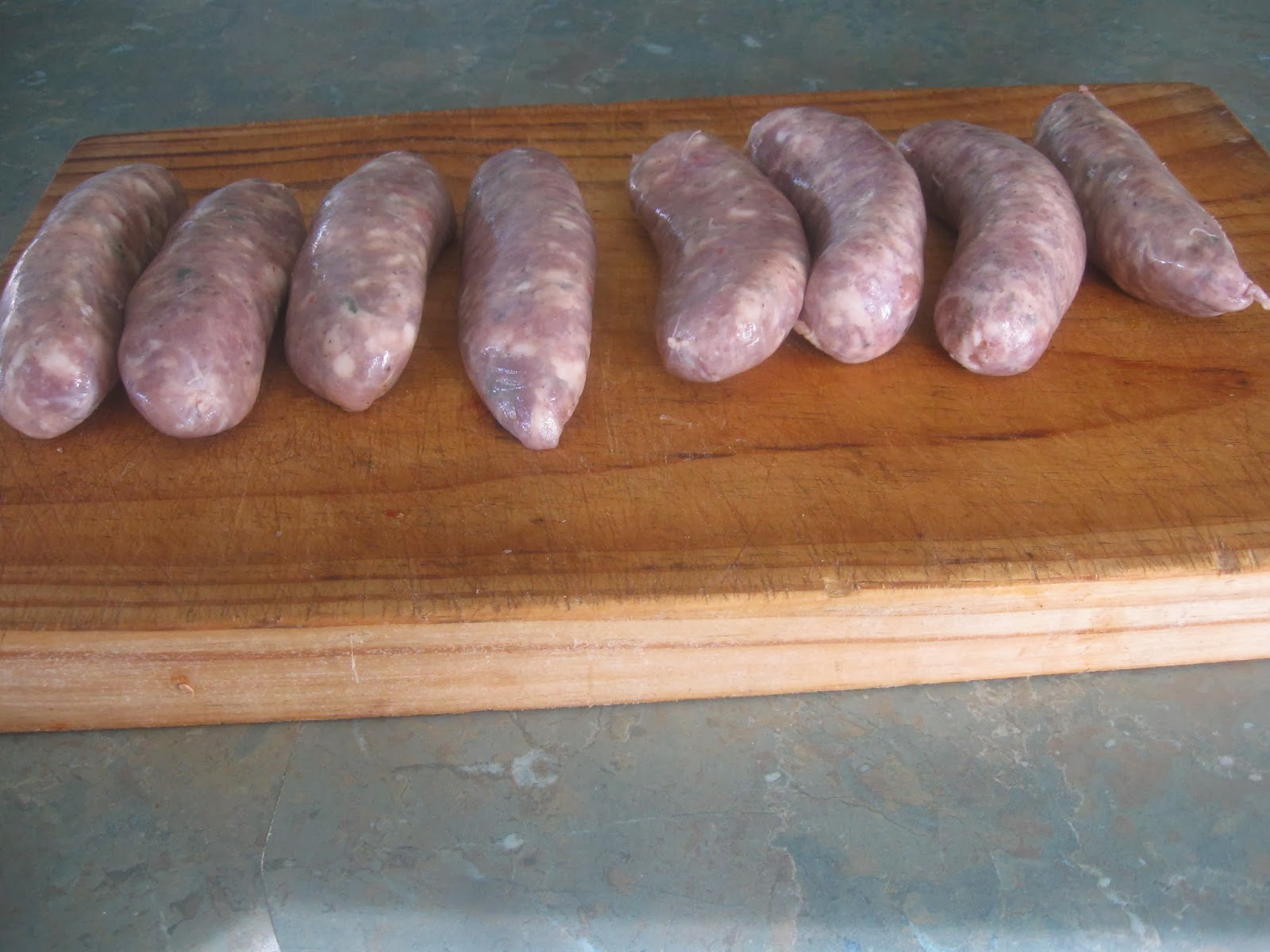 Waikane Butchery has a mobile truck at the market in Chaffers St every Sunday morning. The friendly and affable butcher told me that they source their wild pork from Premium Game in Blenheim. The sausage is made from wild pork, and apple cider is added along with spices. This is a very coarse and chunky sausage, it has a wild rustic feel, it has not gone through a fine mincer or a bowl cutter. These sausages will appeal to people who like to know they are eating meat. There is a tactile sensation on the palate as you masticate the sausage. Flecks and chunks of red and green can be seen in the sausage - this may be capsicum but I can’t be completely sure.


When the sausage was cooked a lot of moisture, including some fat, came out. When eaten hot it is a very sweet sausage and the flavour of pork and apple predominates. When eaten cold, pork is dominant flavour and the apple component is diminished. I consider these sausages to be the sweetest pork sausages I have reviewed to date. I enjoyed this sausage and would buy again. 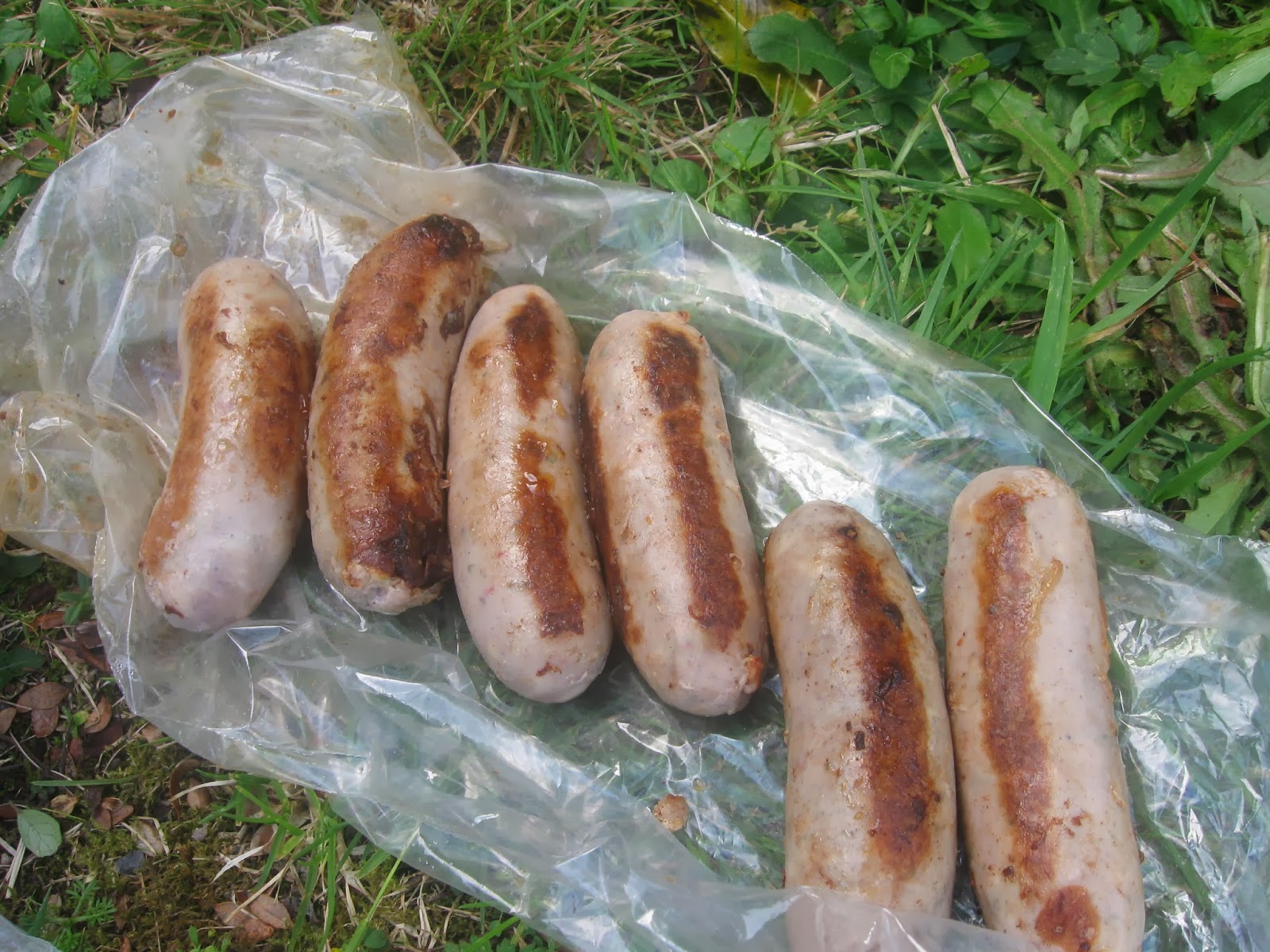 I offered the sausage choice to a variety of people after the event and the consistent response was they preferred the Dutch braadwurst, as they liked its meaty taste. However both these sausages are quality sausages, but the wild pork sausage is better hot than cold.


I washed the sausage down with a pale ale Dead Canary from Parrot Dog brewery in Vivian St. This was a refreshing hoppy and malty pale ale with a bit of acidity. 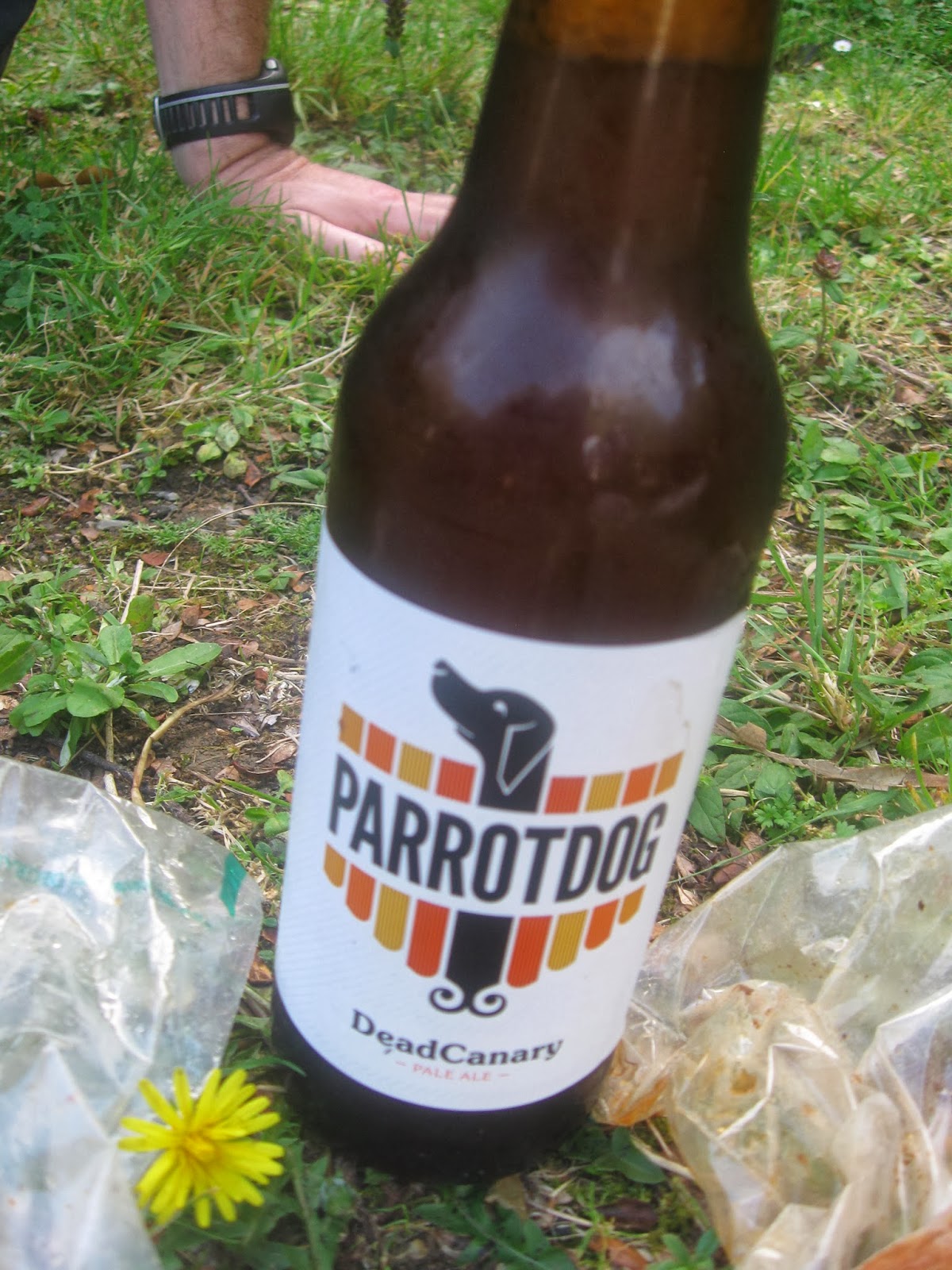 So after a hard day’s slog it was great to sit down, munch on a few saussies, and wash it all down with a beer.


On the drive home one of my running mates looked out the car window between Greytown and Featherston, gazing towards to the Tararuas, he said, "We ran right along there today." When you looked at the ranges, saw the height of the ridges and thought that you ran the traverse of horizon, you can reflect on a satisfying accomplishment.


Over the weekend our whanau celebrated the marriage of one of my cousins. This event bought family and friends together from across New Zealand to Wellington to acknowledge the relationship between the gorgeous bride and her fetching groom, along with having a great party, a good feed, dancing and generally having a good time. The day brought great weather to the picturesque venue above Oriental Bay. The brief window of still, warm weather meant we could be outside on a fine, tranquil Wellington afternoon and well into the evening.


After the wedding, drinks and nibbles were served. One of the items on offer was a cheese. Naturally I asked about the cheese and was told that it was made by a couple who were guests at the wedding. I got talking to them and they had made the French style cheese, coulommiers, at their home in Dunedin and bought it up especially to share with the happy couple. They source the milk from a nearby goat farm that has saanen goats. On a warm day the cheese was soft and gooey, it tasted great with a slightly nutty flavour on the palate. It had a white bloomy edible rind. I am very keen on eating cheese, and while this is a sausage blog, I do believe that good food should be acknowledged. The couple who made the cheese also said they had brought some halloumi, also made from goats’ milk, to cook on the barbecue later in the evening. 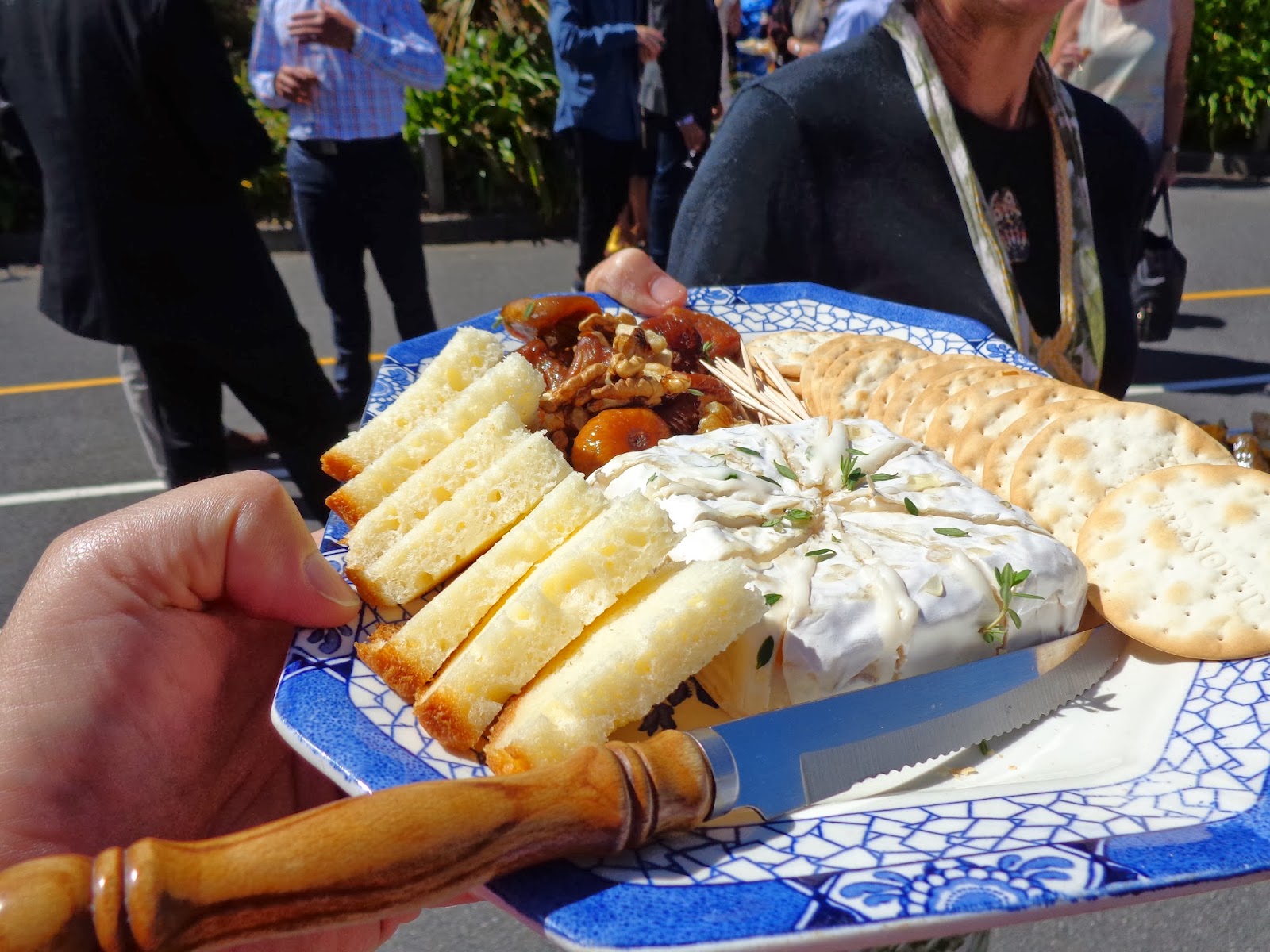 Around 10pm the barbecue was fired up. Of course I was interested to see what was being cooked. I talked to one of chefs, another friend of the groom. He said he only ate wild meat, and he had supplied wild pork patties. For the purposes of the sausage blog these will be euphemistically referred to as "wild pork skinless sausages." Also on the barbecue were some crayfish and the halloumi. 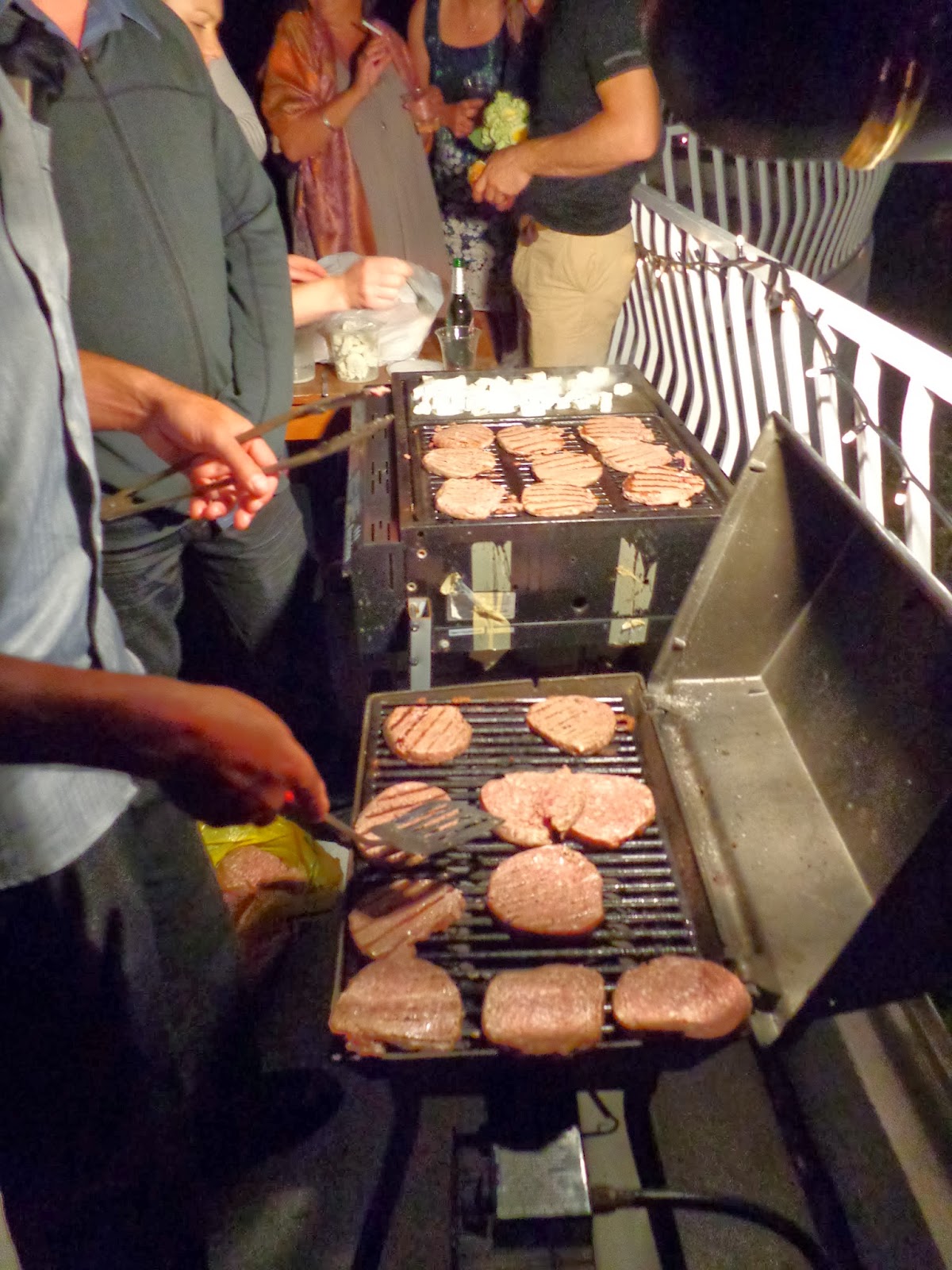 The skinless pork sausages were a plain minced pork, the flavour of wild pig from Taranaki bush country was to be savoured. The guy who provided these said to me that he also makes what he calls a firecracker sausage. He uses manuka to smoke chillies and he then combines this with a bit of paprika to make a spicy hot sausage. I would have been interested to try these, however he did not bring any with him to wedding. Another time perhaps… 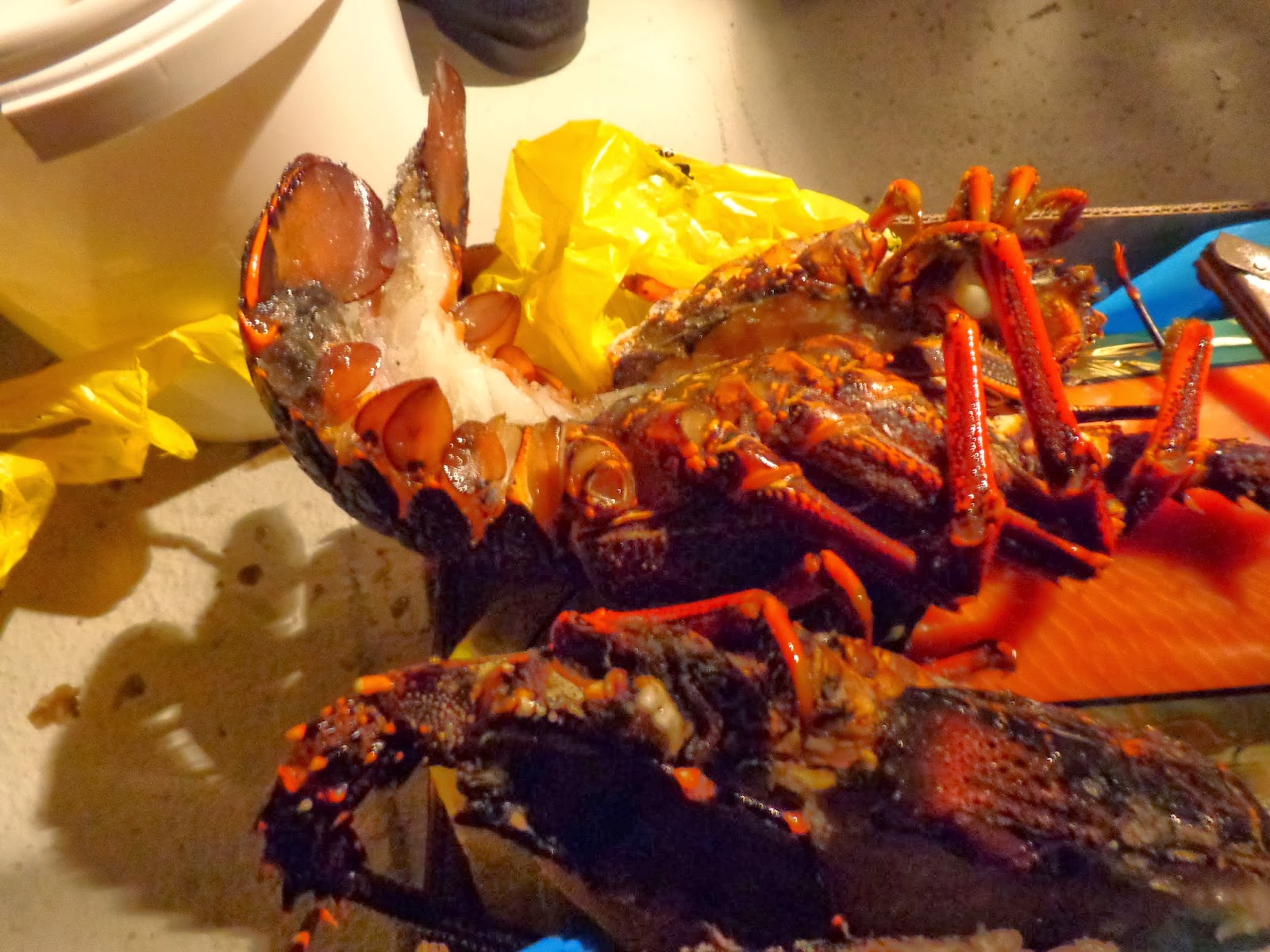 However the best food on the barbecue had to be the halloumi. It tasted great on a piece of bread as we gazed across a still Wellington harbour. The caramelisation on the outside of the halloumi made it crunchy. It was ooey, gooey, and melted in the mouth in the middle. With a saltiness on the palate, it was cheese that slid down quickly after a long day of festivities. It was also worthwhile to have talked with the cheese maker earlier in the evening. She was cooking up the halloumi and said to me as soon as she saw me, "I’ll make sure you get some good pieces." 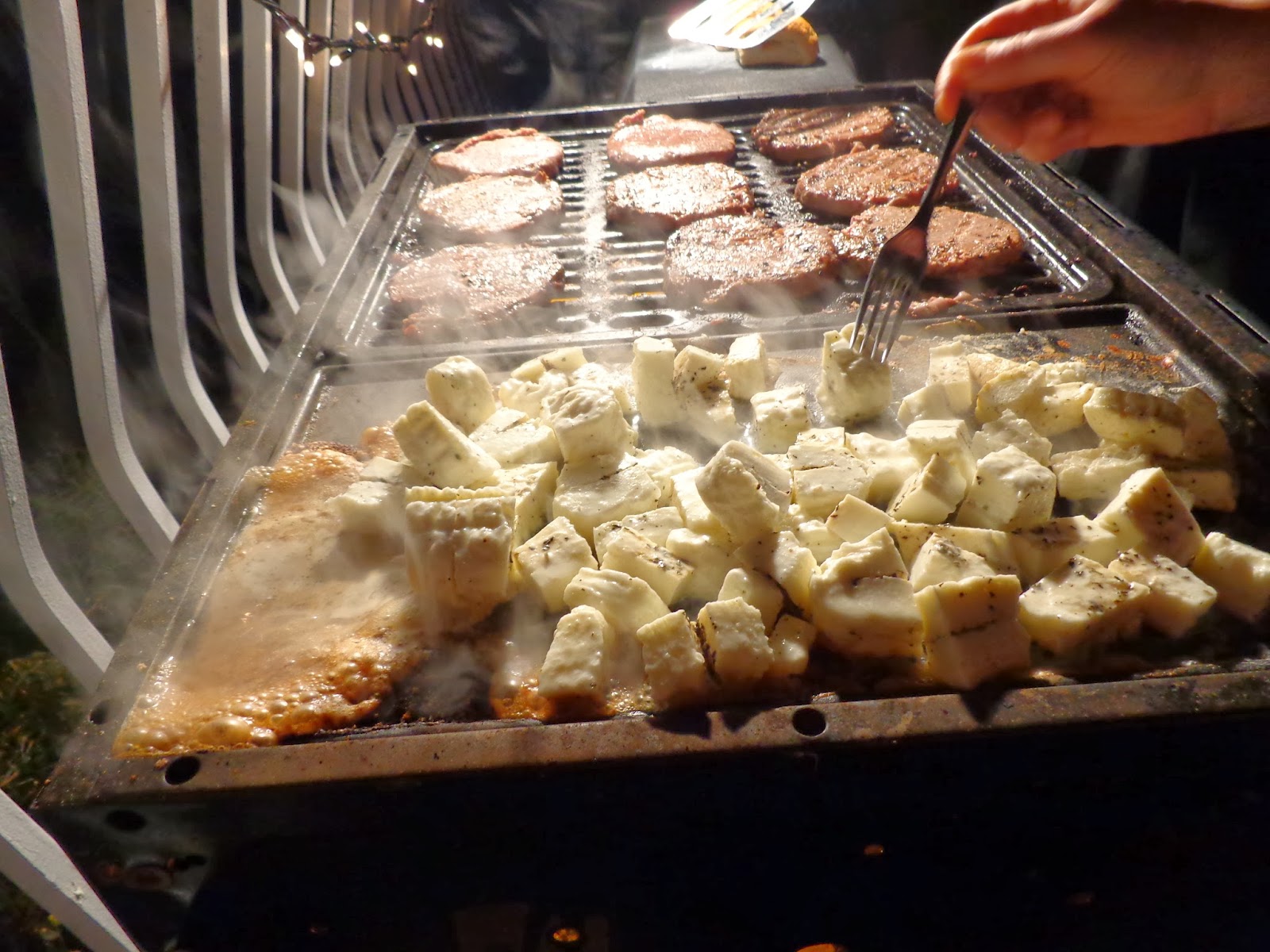 So with great food, fantastic company among whanau, old friends, and new that I had only just met, we were able to converse and gaze over a beautiful, serene, flat Wellington harbour which provided fabulous reflections of the city lights on the water. We wished the newly married couple all the best that life has to offer as we relished and consumed the food being cooked on the barbecue.


It had been a long and enjoyable day as we headed home after midnight with our kids - a day that I am sure we will all remember with great fondness for a long time to come.