My wife had a workmate who was heading to Queenstown for a well deserved holiday recently. Her partner is a sausage lover with whom I had shared the odd quality snarler. After a few emails and some manoeuvring I arranged for them to pick up 5kg of pimenton Argentinian chorizo. Last year I gave this sausage the award of the best sausage I had sampled in 2014. Thanks to the guys at Zamora for making these sausages for me. These are one of my favourites, and I was very pleased when the packages arrived.


When I smelt the pimenton it was different to what I had remembered. The aroma was not as strong as I had anticipated, it was more subdued. Not one to muck about I cooked up a batch for the whanau. The aroma became more pronounced as the heat came through in the pan.


The taste of the sausages was just as good as I remembered. They have a soft initial taste and then the complexity and layers of flavour kicked in. The snarlers disappeared rapidly once the whanau heard what was on offer.
If you are ever in Queenstown check out Zamora, it is well worth the visit. Here is a link to last year's review.
And a big thanks to our friends known as the Smarty-Pants for their excellent courier service!

Ukrainska Kielbasa - Sausages from the Ukraine

Ukrainska Kielbasa - Sausages from the Ukraine


I was in Park Avenue Quality Meats recently ordering mince to make homemade sausages. While there I purchased some Ukrainian snarlers – Ukrainska Kielbasa, as I am always keen to try a new sausage. They are made with 30% pork and 70% beef. They are a medium to fine grind. They smell nice and taste of smokey garlic. This is another quality sausage from the fine range of European sausages made by the team at Park Avenue. It is a milder garlic flavoured sausage that is meaty and good to eat. 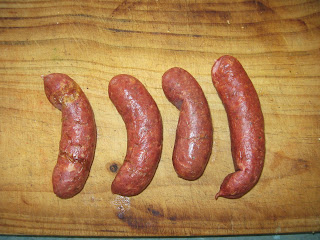 While I was in the shop there was a large slab of meat on the butcher’s block so I enquired about what it was. It was wild venison, sourced from the South Island. When the deer is killed the heart and lungs must also be taken to establish the deer is not carrying any nasty diseases such as Tb. There are only two suppliers of wild venison in the South Island.

Park Avenue Butchers is great place to go for those who seek to eat sausages with a bit of a complexity in flavour or a bit of a kick. 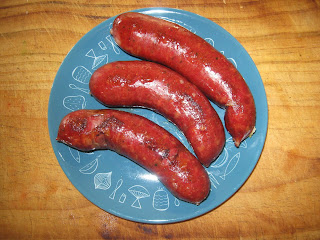 Inspired by the sausages I had consumed from Westmere Butchery I decided to have a go at making some of my own. I "imagined" the quantities…. My sausages had approximately 1.4kg of pork shoulder, put through a 6mm grinder, and had a bit of back and shoulder fat added. I used six Packham pears, stewed and then cooled in the fridge, about ¾ of cup of coarsely chopped walnuts, and 100g of Galaxy blue vein cheese. This was frozen and finely grated. Once made the sausages rested overnight. 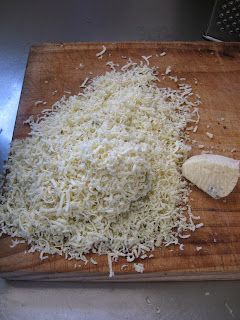 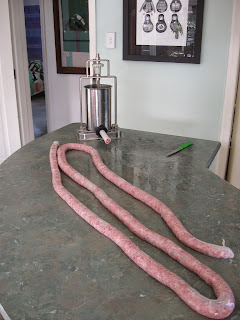 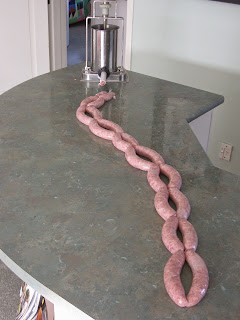 I took some to work the next day and shared these with my work colleagues over a quick lunchtime bite. I also cooked some for the whanau dinner. These were served with roasted capsicum, mushrooms – with pesto and olive oil, tomatoes and mashed spud. 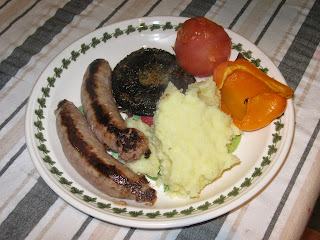 The sweetness of the pork and pear were complemented by the tang of blue cheese, while the walnut added pockets of flavour, and the texture of coarse nuts. One work colleague said I had the balance just right, while the others also made favourable comments. At home the whanau also liked the sausages and were pleased to see that there were some left. Sausage Boy didn’t like the walnuts, but he has never been keen on nuts. I consider the blue flavour was subdued. It comes down to individual taste about how strong you would like the flavour of blue cheese.


I was pleased with this experiment and will use similar quantities again when I make this flavour of sausage in the future.

For an index of homemade sausages on the blog click here.

For those of you who read this blog, you may recall a posting in November 2014 about the Aorangi Undulator. Along with a running mate we supplied snarlers for the end of event barbecue. The organiser left them behind – the less said about this the better.


On Saturday I was at an interclub cross country race around the sand hills near Paraparaumu. I was informed that the sausages purchased for the Aorangi Undulator were being used on the barbecue and if I went over to the barbie I would get one. As I was running lap four in a four person teams’ race I just hoped there would still be some left.


Our team would never set the world on fire with athleticism, pace, speed or endurance. We do, however, have enthusiasm. The third leg runner and I informed our opening lap runner of the team tactics. They had to open up a large lead which we would either defend or fritter away. If this failed we were to bat first and only play shots to the leg side. The first leg runner failed to obey team instructions and we were well down in the pack. I wanted to come in under twenty minutes and had to really push it to finish my leg in 19.51. I was knackered.


It was great to have Park Avenue Dutch Braadworst with onions and white bread after a hard run. A superior sausage being sold as a fundraiser is a fantastic sight. Although they were at an event six months later than intended, they still tasted great.