It is hard work, but someone has to do it.

It is hard work, but someone has to do it.
Judging at the Devro NZ Sausage Competition

Last week I had the pleasure of being a judge at the Devro NZ Sausage Competition. I went to Auckland and for two days I sampled some of the best sausages that are made in New Zealand. As someone who is very keen on eating quality sausages, I found this an interesting and rewarding experience. I was teamed up with representatives from the meat industry, butchers, chefs and food writers. I am not sure where I fitted in but after much consideration I decided I was there to represent the end consumer, the sausage eaters of NZ. 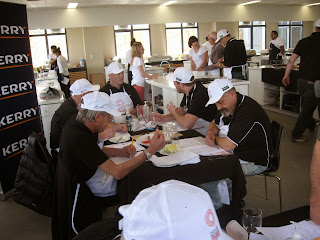 Around twenty judges were used each day. Judging was done by a table of four judges, which were paired and presented with a sausage for judging, in both its uncooked and cooked form. As each new sausage arrived you were paired with a different judge from the table. All judging was done blind, with sausages only identified by a code. I learnt a large amount from the butchers present who had the knowledge and expertise about the science of sausage making. The chefs could detect some of the added ingredients through their well-developed palates. The ability to identify whether the slight orange flavour was natural or dried orange, along with the quality of the blue cheese used in the sausages was impressive and not something I would have dreamed of challenging.
Here are judges are hard at work. 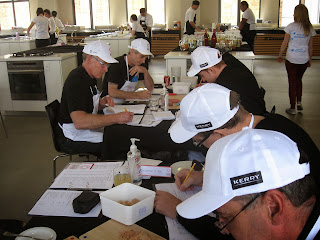 There were over 460 sausages entered in the competition. During the two days I judged the gourmet, traditional pork, and rounds (black and white pudding, and any sausage presented in a round or horseshoe form). And I see that one of the delectable morsels of black pudding was from the Island Bay Butchery who won the gold medal. There were many entries in the gourmet category, with multiple tables judging this section. The task of evaluating, tasting and offering written feedback on over 35 sausages each day was onerous…. but I was up for the challenge. 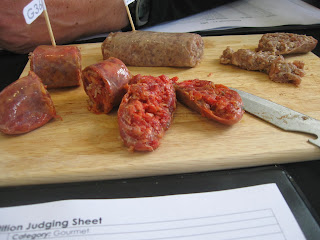 As part of the team that judged traditional pork, I can attest to the quality of the entries. The supreme winner was a beautiful pork sausage made by the Village Butcher in Havelock North. See link. Even within the category of traditional pork sausages this snarler had serious competition, with a large number of the sausages being seriously good. The winner of the traditional pork category was a great sausage from New World in Rototuna, Delights Pure Pork. 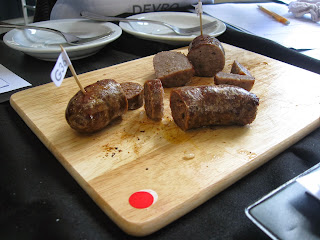 Check out the winners of each category, and watch out for reviews of these sausages. Congratulations to the Wellington butchers who collected medals. See link for all medal winners.
Gold Medal:
Preston’s Master Butcher, Turingia Bratwurst - Pre-cooked/Barbecue Category


So after two days of eating some of NZ’s best sausages I headed home with a smile, a full belly, and a great experience of discussing the intricacies of sausages making and fine food appreciation. It was a difficult task but I was up for the challenge.