We held a barbecue at our place on Saturday evening. The summer this year has been rubbish - wind, rain, and not nearly hot enough. The previous weekend the long range forecast indicated a fine day for Saturday, so the invite went out. We had over 20 people present. I supplied some sausages and meat and more arrived with our guests. From Park Avenue Quality Meats I provided Dutch braadworst, see link, kabonosy, see link, and smoked pork bratwurst from the German Butchery in the Bay of Islands, see link. Our friends brought more so we also had Island Bay Butchery chicken sausages, see link, Blackball Salami Company venison sausages, and some homemade venison sausages. 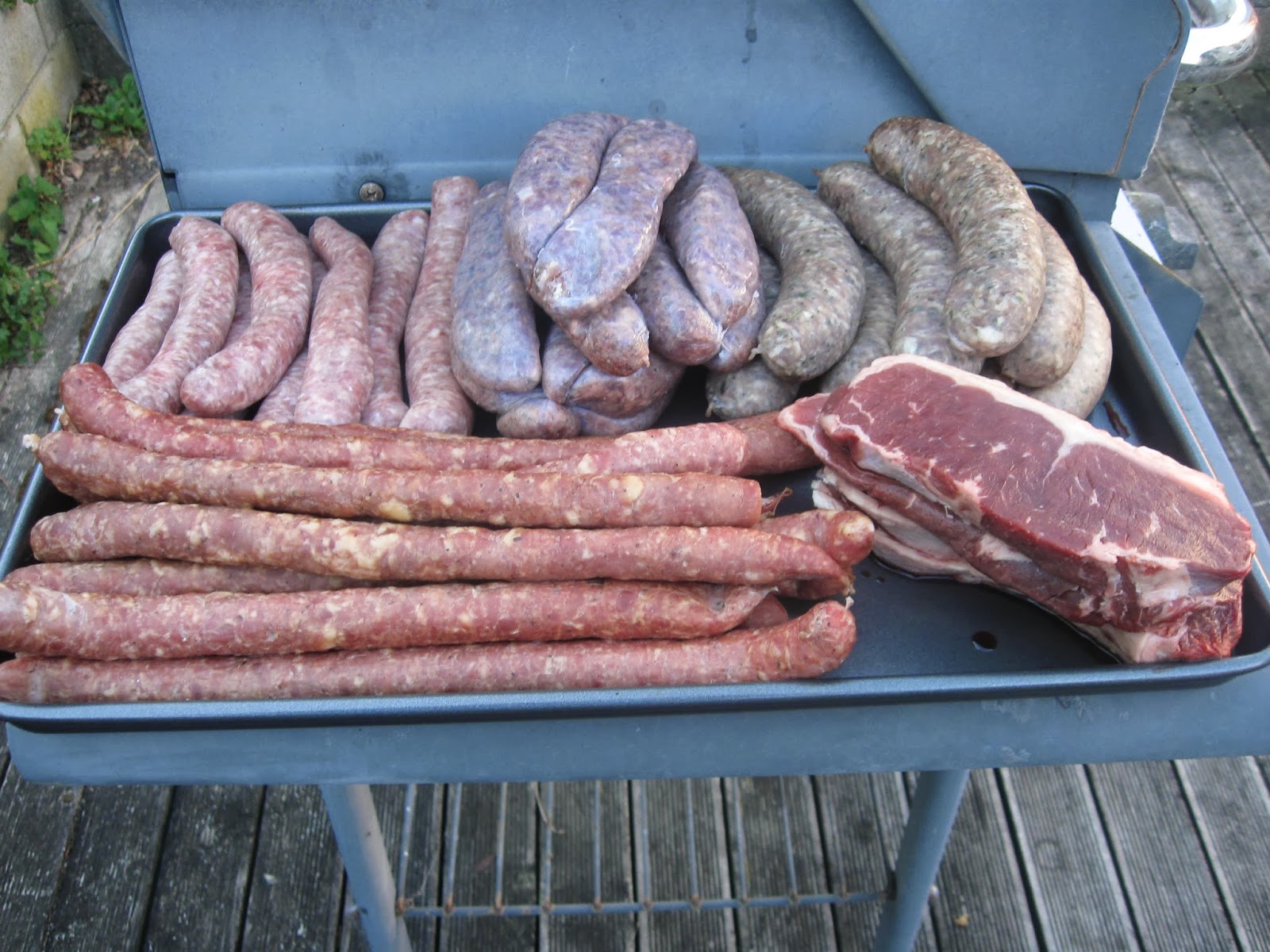 From the top left and clockwise, Dutch braadworst, venison - homemade, smoked pork bratwurst, porterhouse steak, kabonosy
Accompanying the meat was a wide selection of salads and potatoes. My wife spent the afternoon making salads, and a wide array of fine salads was created. This included a tomato, fresh basil and feta salad – very nice and an old standby, easy to whip up in five minutes. A roasted beetroot and carrot salad – I love roasted beetroot. Tassajira warm red cabbage salad – very popular with our family. And my favourite, a char grilled corn salad with a lime and mint dressing. These were supplement by a green salad, roast potatoes and creamy cheese potatoes which our guests contributed.
So as you can see there was an excellent selection of kai and plenty for all.

The comments about the gender roles and the respective tasks in preparation for bbq, are noted, but ignored, we need to play to our respective strengths.
When one of our friends arrived in the house he was wearing a jacket with many pockets. He sidled up to me in the kitchen and then proceeded to produce, one, and after a dramatic pause, a second packet of venison sausages, and after another dramatic pause, a bottle of wine. He told me an associate of his had shot the deer and then made the sausages, referring to them all evening as the "illegal" sausages. 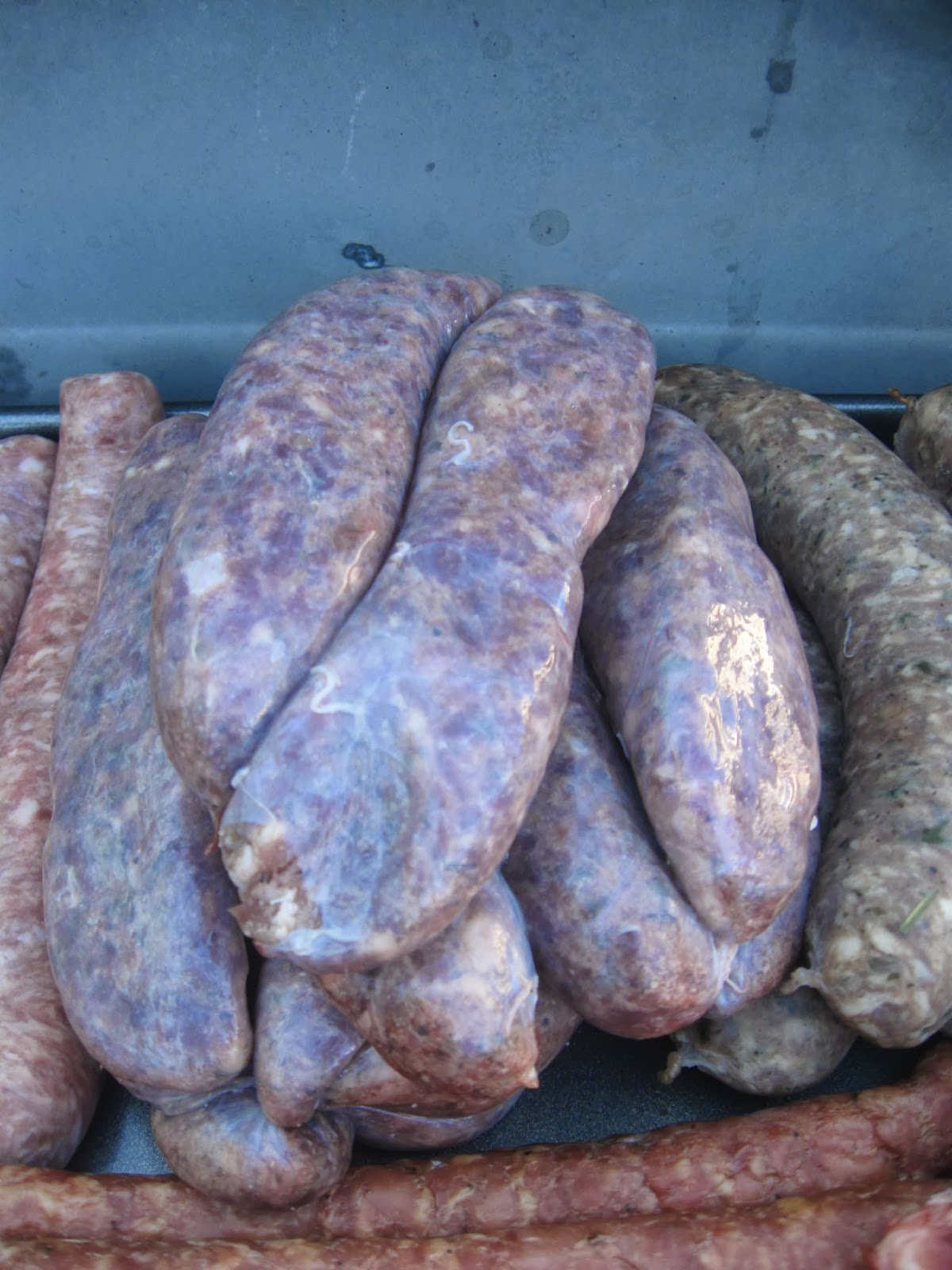 The homemade venison sausages
While cooking the bbq we did exercise a bit of quality control and a couple of kabonosy were consumed by the hardy souls huddled outside to ensure the cooking was progressing nicely. I had only intended to provide 6-8 kabonosy, however my wife said, they are really popular - cook at least twelve. As I have said before she is a wise woman, so it was no surprise that the first variety of sausages to be snapped up from the table were the kabonosy. A clear favourite of everybody. If you are looking for a sausage that has a moderate smoky taste you can’t go past these beauties. 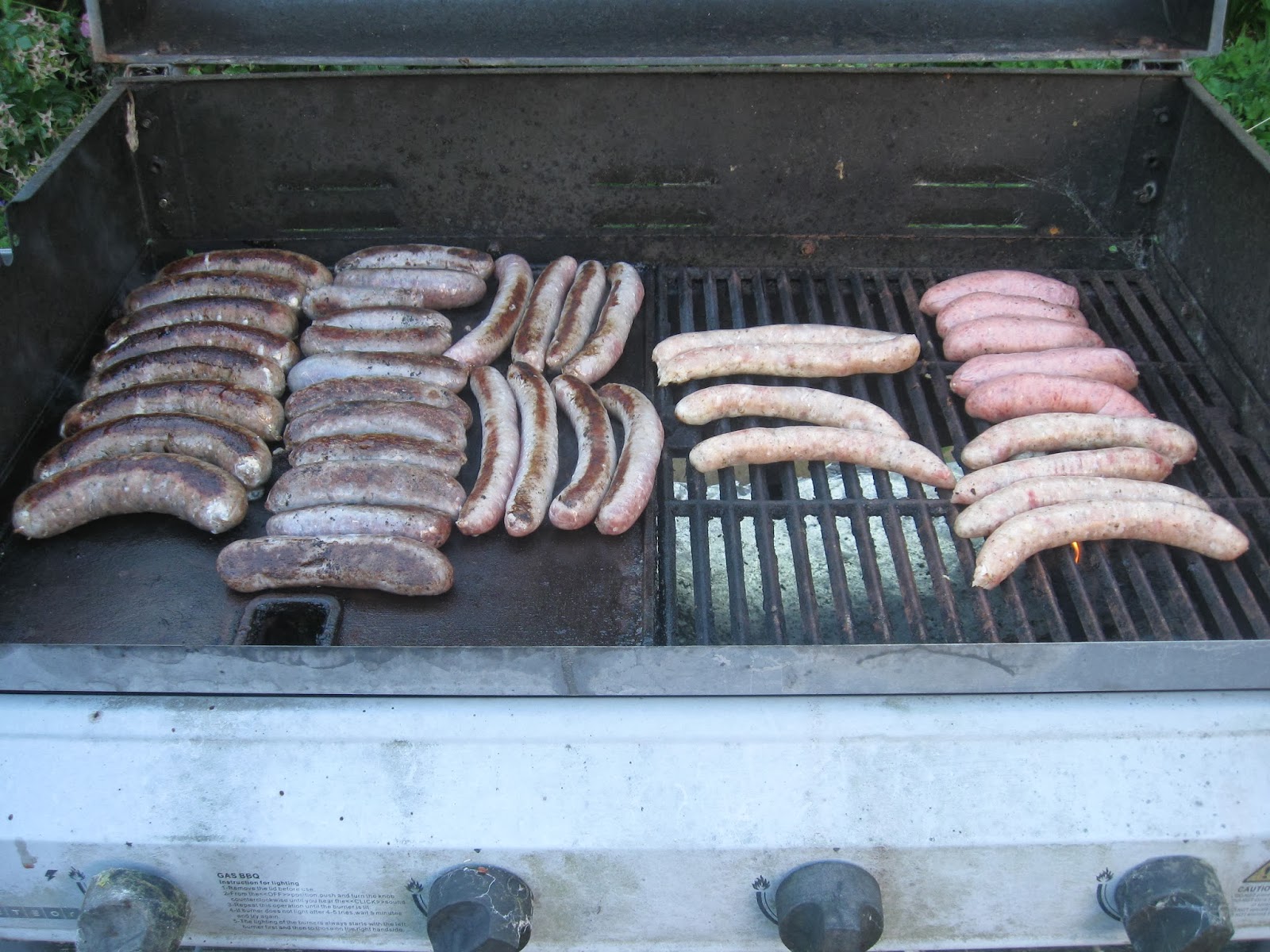 
The homemade venison sausage was ground to a medium consistency, with some larger chunks of meat were also present. They were soft on the palate when placed in the mouth. Initially I thought this was a very subtle venison sausage then the stronger venison taste kicks in. There were also visible pieces of herb in the sausage but I could not determine what variety because the venison over powered the flavour of the herb. These sausages were good and wholesome. Venison is not my favourite sausage, but I thought these were definitely above average on the spectrum of the venison sausages I have eaten. Congratulations must go to both the hunter and sausage maker. It is always good to try someone’s homemade snarler. 
The bbq was cooked, the food was eaten - great company, lots of stories, repartee, lies and laughter. A very pleasant summer’s evening.