It is not all beer and sausages - Part Eleven

It is not all beer and sausages – Part Eleven


Yesterday I finished the Tararua Mountain Race. This was over the southern crossing route from Kaitoke to Otaki Forks. This route has 2250 metres of climbing over its 37km. It is tough on both the legs and the mind. This year I found it difficult and demanding and I knew I was going to be slower than when the event was over this route two years ago. During the last couple of climbs before Hector I wondered if I would be the last finisher. I was surprised to find over ten competitors finished after me. I even a passed a few people on the way down from Kime Hut. There is excellent comradery between competitors, we all know that we are suffering together. 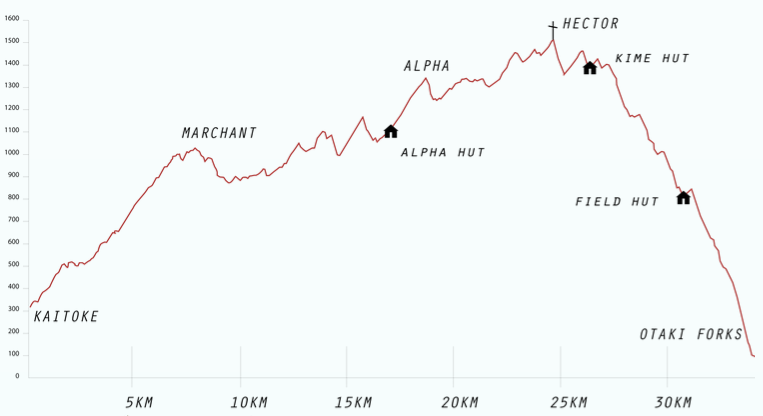 Normally when there are hills I just put it into a low gear and just keep on going - I don’t like to stop, I just chug along. On the last two climbs before Mt Hector, I was knackered and had to battle with my mind to keep on going. The body wanted a break, the mind had to battle hard to ignore the ache, pain and exhaustion and keep on going.  Talking to a guy after the event he said he passed me on one of these ascents, he said he had to look hard as he had never seen me moving like that. I’m not sure what he saw, but I think I know it didn’t look pretty. However despite feeling really stuffed, once I got onto the downhill near Kime Hut, muscle memory kicked in and I started to trot at a faster pace. Apart from the uphill bits, it mostly downhill to the finish at Otaki Forks.


I am really impressed by the speed that those who start later and finish well before me attain. They are impressive athletes. 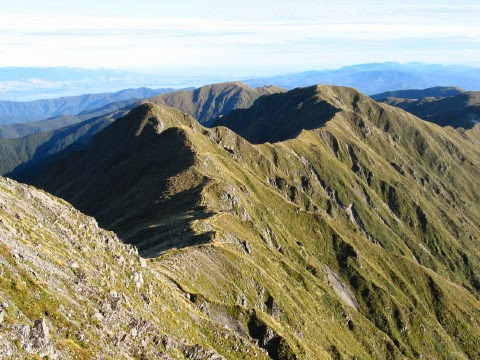 Looking south from Mt Hector
The weather was the best it has been for the last few times I have completed the route.  However visibility was severely diminished and the first mist hit before the old Dobson Hut site. Although the mist and clouds were down very low, the wind was gentle. It was cold over the tops, and a couple of layers were needed, along with a beanie. The marshals at Atkinson were able to shelter in the lee of the peak. They do a fantastic job ensuring that we all get through. Thanks to all the marshals for their work. I have included a photo taken on a rare day when the views are great - the route we take is along the ridge.
So what was it that kept me going? Sausages and beer of course. I brought some German grobe bratwurst form Park Avenue Quality Meats and I knew these were waiting for me at the finish line. This is a coarsely ground pork sausage that has mild seasoning. I liked this sausage and its flavour, however I did strike a couple of bits of gristle in the meat. This was disappointing, but it would be the first product I have ever brought from Park Avenue where this has been an issue. I consider this butcher to Wellington’s premier sausage maker and I have brought heaps of snarlers from them. This is the first time I have not been very satisfied with a product they have made. However one slight grizzle does not mean their status as the best sausage shop in Wellington is in any doubt. 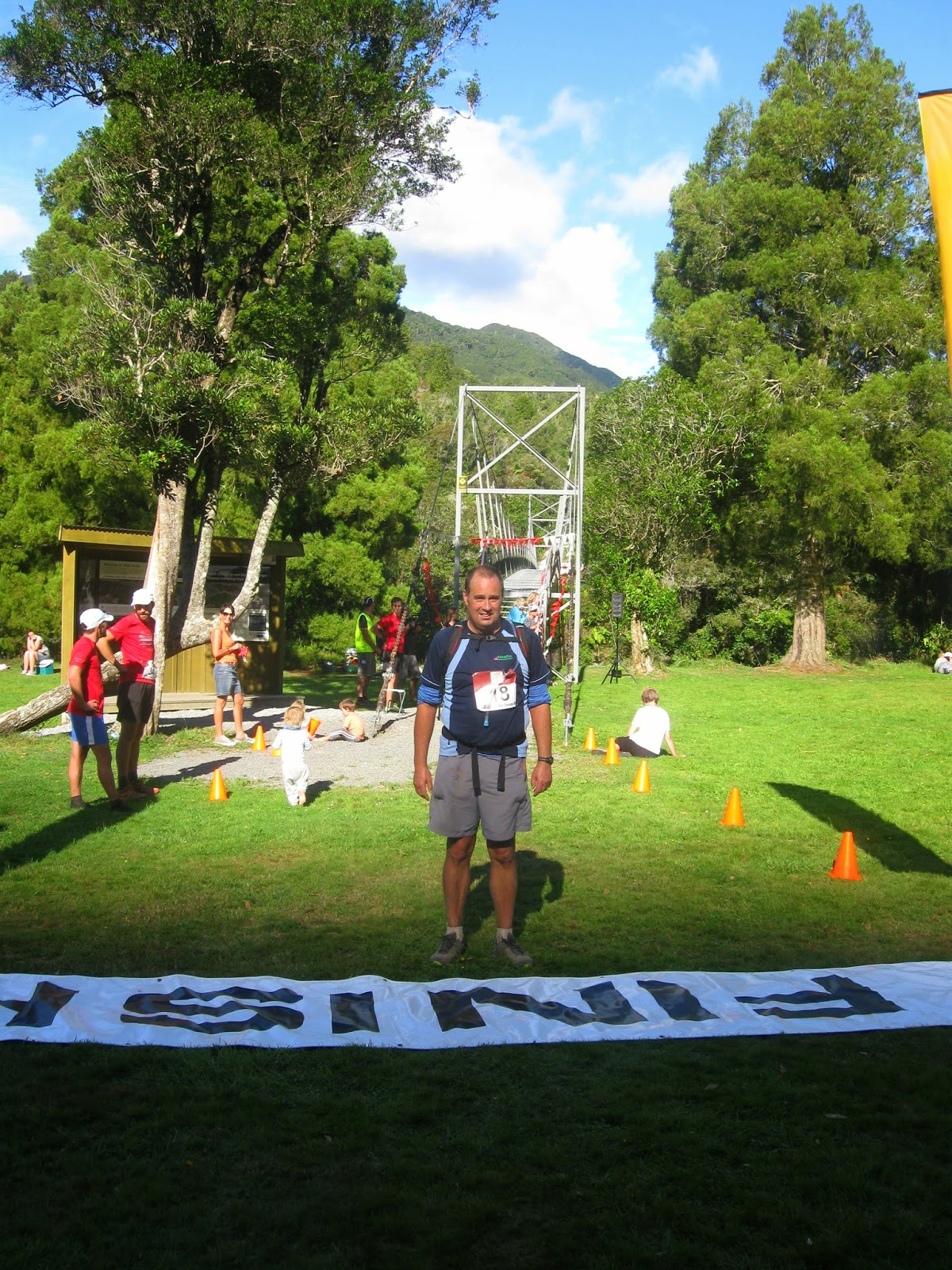 I washed this down with a Lord Almighty Yakima Pale Ale. This beer had a very nice aroma and tasted good after a hard day in the hills. On the bottle in fine print it says, “beer so hardy it can quench a thirst for adventure.” This beer rehydrated a tired body, however it was a bit of an overstatement as the thirst for adventure remains. 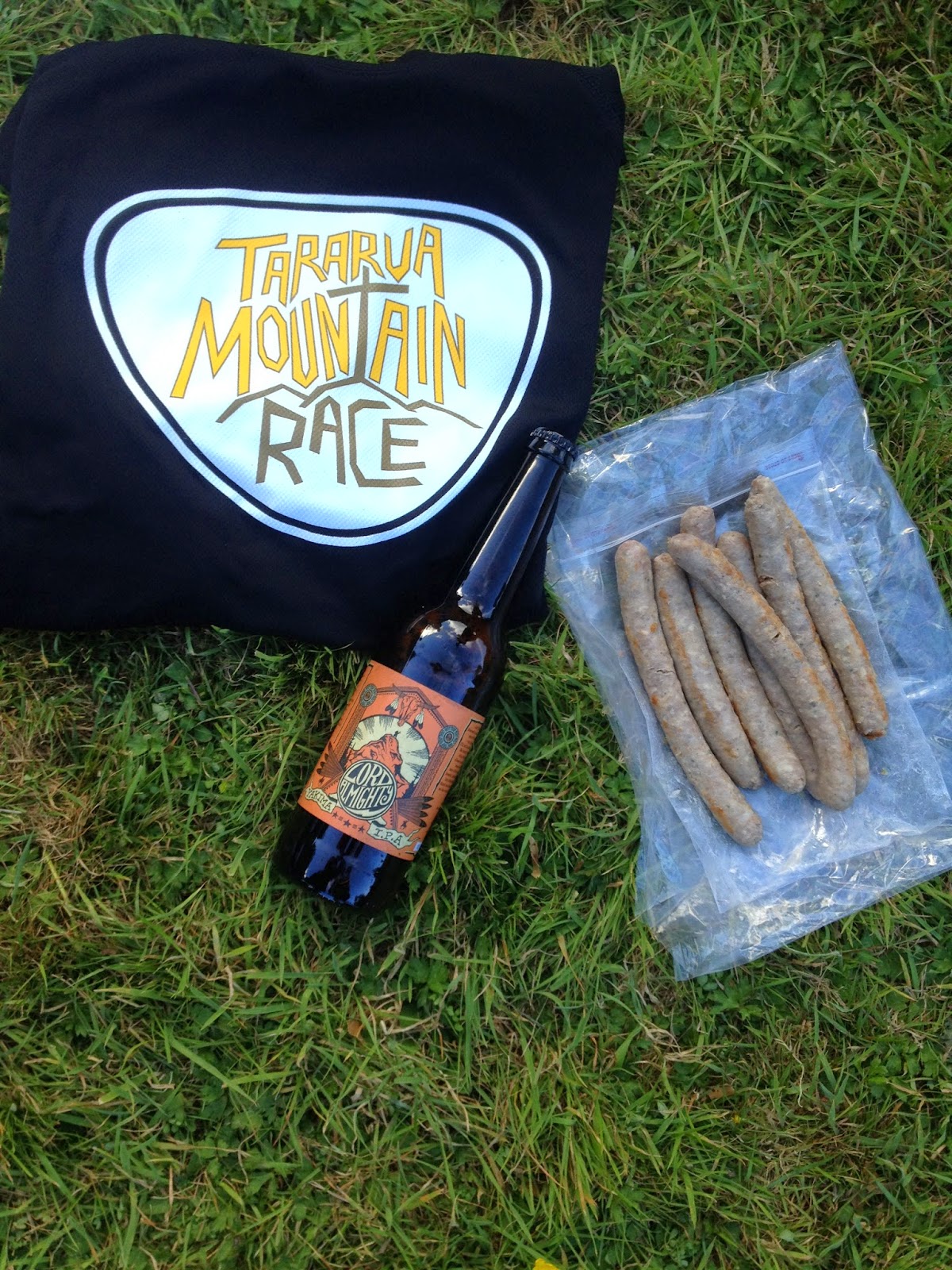 So after a very hard day in the mountains, I was relieved to finish. However when I return to this route in 2017 I have the resolve to complete the course in the quicker time. Bring it on!


For links to other parts in this series click here.  And here is a great little film of one competitor's race. And another one that shows the gnarliness of the terrain.
Posted by Don Stevens at 19:42