Aussies prevail on Waitangi Day with a sweet and spicy Italian number.

Aussies prevail on Waitangi Day with a sweet and spicy Italian number.

On Waitangi Day I headed off to the stadium to see NZ play Australia in a one day cricket match. I am always keen to see us take on the Aussies. Unfortunately, from a NZ perspective, wins against the arrogant men in yellow (or as the Australians would say, gold) are not all that common. That does mean that when NZ wins the victory is very sweet.


This was the second of a three match series and NZ had comprehensively won the first game. Beware the wounded Aussie. 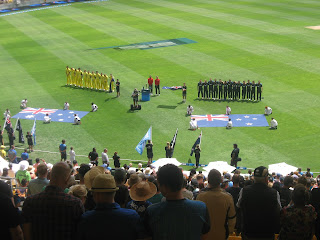 The weather was great and we had seats on the sunny side of the stadium. Watching sport in the afternoon sun is one of life’s great delights. Although NZ batted adequately you did wonder at the innings break if they were 20-40 runs light. After an impressive opening stand by Australia the game was already in the bag, and they duly batted their way to victory. 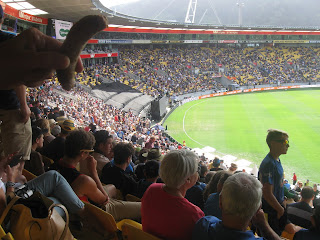 I had brought some snarlers to nibble on during the game. These were sweet and spicy Italian sausages from Cameron Harrison. These are a medium to coarse ground sausage which has good texture in the mouth. They are made of a beef and pork blend. Added to this is a complex and balanced flavour achieved by paprika, hints of pepper and a piquant of fennel. There are also other flavours that I could not distinguish. This sausage is a great eater. It achieves this by having layers of flavour that complement each other. It will not be to everyone’s liking - it does have heat, but this is not too strong. My mate said to me as he munched on a snarler - this certainly tantalises and awakens the tonsils. Another one commented that this was as hot a sausage as they would want to eat.


I consider this sausage to be the best sausage I have brought from Cameron Harrison. It is similar in style to the Italian Banderia made by Westmere Butchery in Auckland.


So it was an enjoyable day sitting and watching cricket on a beautiful warm Wellington day. The result was not to my liking; however this was ameliorated by consuming some very enjoyable sausages.


And in the final match of the series NZ prevailed. After looking gone for all money NZ clawed back and beat the Aussies to retain the Chappell – Hadlee Trophy. Happiness reigns.