I also purchased some black pudding from the butcher’s shop in Akaroa, see the previous post. After I had selected the pudding, I enquired about it – the butcher told me they did not make it themselves, they sourced it from Peter Timbs in Christchurch. 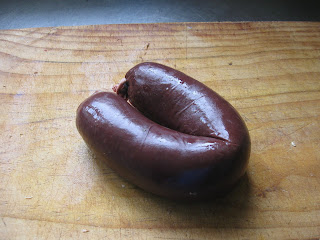 
I would not purchase this again as there are plenty of better examples of black pudding that are able to be purchased.