Today I was in a school staffroom at morning tea time. A woman came around and offered black pudding to all those present. She had made the black pudding and was sharing it with her colleagues. Some of those present declined the offer, they were not keen. However plenty were eager to sample the sausage.
Wow, I thought this is fantastic, food and even better sausages. I ate a morsel and enjoyed the texture and flavour. This black pudding had a medium to coarse texture, it had a mild flavour with a hint of onion and garlic. It was pleasant on the palate. This was an unexpected and very enjoyable surprise. 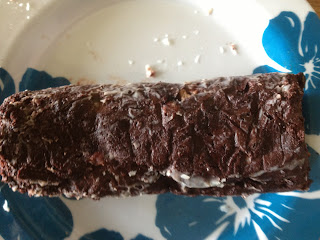 The black pudding did not have a skin, the dripping that was used in the recipe acts as a binding agent. It held together well in the long tradition of many skinless sausages.

A great way to have morning tea. Tēnā rawa atu koe Whaea Janine.
(For those of you who need a translation of Māori, New Zealand’s indigenous language; Thank you Aunty Janine)


The ingredients of this black pudding came from a sheep that had been rendered.
The recipe


Ingredients: Sheep’s blood- about 4 litres, Breadcrumbs – about 2 loaves, 4 large Onions – 4 large, Garlic – 1 bulb, Dripping – about 500g, Salt and pepper.
Mix together, heat on a low setting, gently stir the mixture, when the mixture has turned black mould into a sausage tube, use tinfoil to maintain the tubes shape. Let the mixture cool and set. Place in fridge.