I went with a group of friends to the stadium to see the second leg of NZ playing Mexico for a place in the FIFA World Cup finals in Brazil in 2014. Four years ago I was present when NZ beat Bahrain to claim a place in the World Cup in South Africa. The place was electric that night. It was the best sporting event I have been to at the stadium. (It probably almost goes without saying that the best sporting event I have been to was the final of the Rugby World Cup in 2011. It was an extremely tense match - that was not enjoyable, but we all had such great delight when the ball was kicked out for the final whistle.) After a 5-1 trashing by Mexico in the first leg, I went hoping to see a good game. The Mexicans were faster, more skilful and a vastly better team. After banging in three goals in the first half, the game was gone. When NZ scored two late goals after 80 minutes the NZ supporters became wistfully delusional and chanted 8-3! 8-3! 8-3! The Mexicans then reignited their team and banged another one past our goalie to reiterate which team was the quality soccer team. 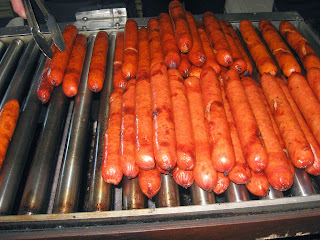 The packed stadium meant we arrived reasonably early. My son, Sausage Boy, and I brought a Fritz’s Wiener to eat prior to game. He had a mild bratwurst, I brought the spicy bratwurst. Fritz’s Wieners are a franchised sausage operation. The guy behind the barbeque was able to tell me that the sausages were made by Hellers, and they only sold this variety of sausages to the franchise. 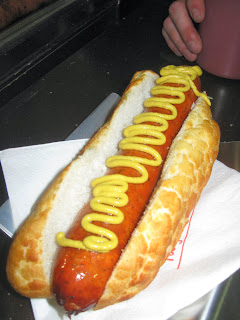 My sausage was pork and beef sausage which was lightly manuka smoked. Tasting the sausage you would not know it was smoked. The dominant flavour is hot spice. Biting into the sausage there was reasonable amount of watery fat and you could see small lumps of fat in the ground meat. The amount of mustard placed on the sausage also diminished the flavour, rather than enhancing it. So the dominant taste was hot spice and mustard. 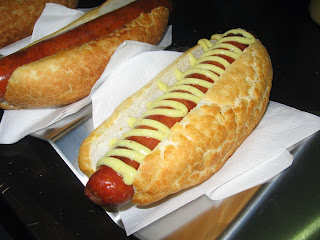 Sausage Boy thought his bratwurst was bland. He said it was like the frankfurters I used to put in the rolls I made for the boys for lunch when they were at primary school. The only thing of substance was the condiment, with the mustard being the dominating flavour. His bratwurst was also smoked, but again you could not taste any smokiness in the flavour of the sausage.


The buns were very good. They were nicely toasted and were a light bread. Within the context of mass produced takeaway food at a stadium with over 30,000 people present the bratwurst was above average. Better than the chips and burgers that are served. I would buy these again, however my culinary expectation would be reasonably low. You are talking about fast food here, and it is an upmarket hotdog in a bun.