It is not all beer and sausages - Part Four

It is not all beer and sausages – Part Four

Yesterday I went on a training run in the hills. Three of us ran from Kaitoke, north of Upper Hutt, to the Waiohine Gorge road end, inland from Greytown. This involves going over two saddles, and along the Tauherenikau River which flows in between them. It was a good day for running in the hills, the weather was mild and when the sun come out there was bit a heat, along with a slight breeze to cool you. We covered around 22km at a training run pace, not too fast. In a few weeks all of us are competing in the Jumbo-Holdsworth run, and two of us intend to also run the Tararua Mountain Race in early March. We spent the run trying to convince our running partner to do the same. Our run covered the first half of the Tararua Mountain Race route for 2014. 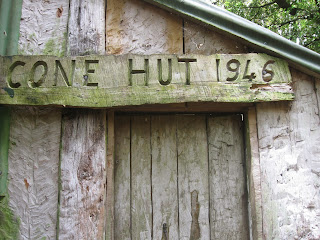 After 17km or so you arrive at Cone Hut. Cone Hut is set in a picturesque wide gully, just above the Tauherenikau River. It is located beneath mature beech trees. This is the last remaining traditional slab hut in the Tararuas. The walls of this hut are made from hewn totara slabs. It has a dirt floor, and a sleeping platform. I spent a night in this hut sometime around 1980 and it was in a state of disrepair then. We hung our packs from the rafters to stop the rats getting into our food. Since then the hut has been repaired and restored, during in the late 1980s. 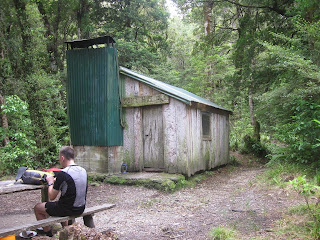 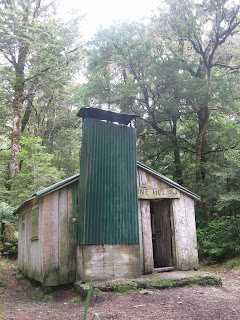 Unbelievably, when I entered the hut I found two sausages on the bench. What a delight! I sampled these and thought they must have been cooked the night before. They had a nice level of caramelisation and once bitten into I thought they were probably Preston’s Master Butchers' silver medal winners in the gourmet category in the 2013 Devro Sausage Awards. They looked and tasted like the cracked pepper, coriander and basil sausage. This sausage is a meat sausage and this is predominant taste. The meat is supplemented by a moderate taste of pepper. This is the strongest secondary flavour. Elements of coriander and basil can be detected, and complement the pepper taste. This is a great eating, hearty, chunky sausage. I will buy this sausage. 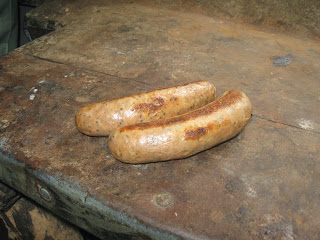 I did find a wrapper in the hut’s fireplace. This labelling on the sausages does not add up. It lists the contents of the sausage as: pork 56%, beef 28%, maize flour and salt are listed next (assuming that ingredients are listed in size order you see why the numbers cause confusion), then, spices - pepper 9.5% and coriander 7%, sugar, herbs – including basil leaves 5%, and few more….. For those of you who have elementary skills in addition… this does not make sense.


I was part of the judging panel for the gourmet category in the sausage awards. There were numerous entries, with 3 or 4 tables judging some high quality gourmet snarlers. I am unsure if this sausage was one that our table judged. I was of course a novice judge but I did find that when sampling over 30 sausages in a day, I could not recall everything I judged.


For those of you who are familiar with running nutrition, and keeping fuelled up on the run, you will not find too many running guides that recommend sausages as a source of energy while you run. However as a runner who is at the forefront of pushing the boundaries in the evolution of supplements to be consumed while running; take my word and be ahead of the game, the eating of sausages on a run is the best!


And when we got the end there was no beer so we settled for a coffee in Greytown instead.


See links to other parts of this series.