It does not happen very often, however of the four sausages purchased only three quarters of one sausage was consumed. The rest went into the bin.


These sausages are finely ground and taste of paprika, or maybe cayenne, and not much else. The flavour is over powering and extremely intense, it was like eating these spices without the meat. It was not pleasant. While I like a spicy sausage however there is a complete lack the complexity of flavours that occur in quality spicy sausages. It was just a non subtle full on blast of hot spice. You could see flecks of green in the sausage, because of the over powering flavour who knows what flavour was being stymied. My wife sampled a portion of sausage, agreed with me, and then the sausages remained on the plate untouched until the end of the meal. 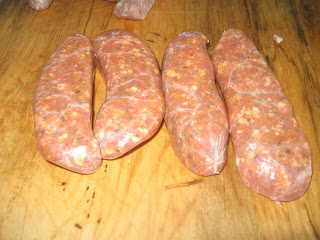 I assume I do not need to state the obvious. These are definitely on the do not purchase again list.


These sausages where purchased from Fresh Choice in Takaka.